JONESBORO — The City of Jonesboro held a joint meeting with Suddenlink Thursday night to address numerous complaints by citizens. The St. Bernards Auditorium was at capacity; in fact, it was standing-room-only for disgruntled residents.

Hundreds of Jonesboro residents showed up to voice their complaints to media giant Suddenlink. Complaints ranged from wrongful charges to lack of competent service and were never in short supply.

“Our company has not delivered as it should. I want to apologize that it’s come to this. The crowd is evidence of how serious it is,” Brad Ayers — senior director of governmental affairs for Altice USA, the company that owns Suddenlink — said.

Hundreds filled the St. Bernard’s Auditorium for the meeting. Photo by Chase Gage.

Representatives from both Jonesboro and Suddenlink were available from 6 p.m. to 8 p.m. to answer questions and complaints submitted by customers. Ayers “promised” the company would address every complaint “within a week” of the meeting. Jonesboro’s communications director Bill Campbell read several of the complaints to the crowd.

The majority of the meeting consisted of Suddenlink representatives attempting to answer specific questions by residents, though they often received “corporate” answers instead of legitimate solutions. The crowd tried their best not to let the company off the hook.

Perhaps the loudest reaction of the night came when the company reluctantly revealed one of their call centers was located in South Africa; multiple complaints included call center employees not speaking fluent English.

“I can never get a real person on the phone, and when I do, they’re foreign and I can’t understand them,” Campbell read from a submitted complaint.

Further unrest ensued when a customer proclaimed “if you’re billing for services that aren’t provided, that’s a problem.” The statement was met with applause and a very audible “amen” from the back of the room.

“I’ve gotten your calls and emails. This (crowd) is evidence of what’s going on.” – Jonesboro Mayor Harold Perrin

State Senator John Cooper was in attendance as well to address his constituents and their frustrations.

“It looks to me like you’re trying to handle this with management. Personally, I would like to see highly trained people here to take care of this. It’s probably a little bigger than what you have here at this meeting tonight,” Cooper said to the Suddenlink representatives.

“You’re welcome to contact me at any time over these issues. I will work with this company to improve the service,” Cooper said. Cooper can be contacted by phone at 870-761-0130 or by email at john.cooper@senate.ar.gov. 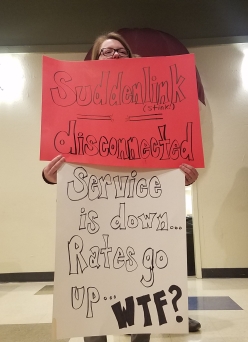 An upset customer voiced their opinion on Suddenlink during the meeting Thursday night. Photo by Chase Gage.

Jonesboro Mayor Harold Perrin arranged the town-hall-style meeting after a Nov. 7 meeting with Suddenlink representatives. Prior to the initial meeting, Perrin receiving numerous calls and emails complaining about the company and “immediately” got on the phone to fix them. Perrin assured citizens that their voices were being heard and their issues would be addressed.

“Send any unanswered questions to my office. This is a serious issue we need to resolve,” Jonesboro Mayor Harold Perrin said to open the meeting. “I’ve gotten your calls and emails. This (crowd) is evidence of what’s going on.”

In the end, the meeting did little to resolve any issues despite the best efforts of the Suddenlink representatives. However, if their promise is fulfilled, the residents of Jonesboro will be taken care of in the near future.

“We’ve heard you loud and clear,” Ayers said in his closing statement. Whether or not they listened, though, is yet to be determined.