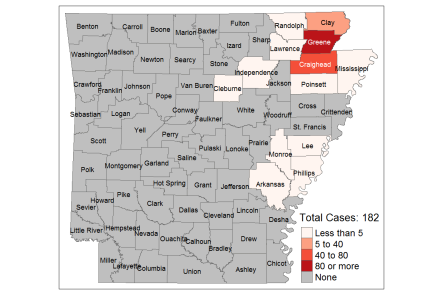 This map displays the reported cases of hepatitis A by county, showing a high concentration of cases in Northeast Arkansas. (Courtesy of Arkansas Department of Health)

JONESBORO — Health officials in Northeast Arkansas report as many as 182 cases of hepatitis A since February as part of an outbreak throughout the area.

Students at Arkansas State University experienced a scare when a food-service worker employed through A-State’s food service provider, Sodexo, was reported to have a potential case of hepatitis A. A-State no longer employs the worker.

A-State Chancellor Kelly Damphousse sent an Oct. 25 email to students, faculty and staff detailing the situation, and assuring the public all appropriate food-safety procedures were in place to limit exposure.

“I want to assure you that it is safe to eat in the Acansa Dining Hall. I ate breakfast there this morning, and I will be eating lunch there today,” Damphousse wrote in the email.

The Arkansas Department of Health held vaccination clinics at the Craighead County Health Department and on A-State campus for anyone concerned about potential exposure. However, officials reassured the public that the virus was restricted to the single employee, and not found in the food or any other sources.

“There is not an outbreak of hepatitis A at Arkansas State University, and there is no documented foodborne case,” A-State officials said in a statement.

A-State officials reviewed Sodexo’s various food handling procedures, including the continuous wearing of gloves, appropriate hand-washing technique and regular sanitization of the food-preparation area. Michael Wonderly, Sodexo’s director of campus operations for A-State, said employees are trained in these procedures according to Hazard Analysis Critical Control Points policy standards to ensure the safety of the food.

A highly contagious liver infection, symptoms of hepatitis A can include fever, fatigue, loss of appetite, nausea, vomiting, abdominal pain, dark urine, diarrhea, clay-colored stool, joint pain and jaundice (yellow of the skin and eyes). Wonderly said Sodexo policy tells employees to stay home if they have fever, vomiting or diarrhea, and employees are sent home if they present any symptoms at work. 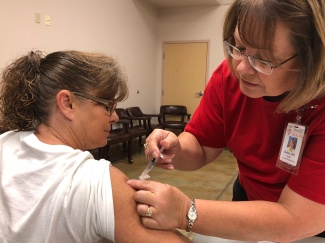 Sandra Holland receives her hepatitis A vaccine from Debra Cook, LPN, during a clinic at the Craighead County Health Unit. (Photo by Keith Turner)

“This particular employee also showed no symptoms that would have had us send them away for medical attention before being allowed to return to work, so when the employee notified us we took the proper measures and informed the university which was also informed by the Health Department,” Wonderly said. All Sodexo employees also received vaccinations.

ADH spokesperson Meg Mirivel advised the risk of getting hepatitis A through a food service setting is low, and hepatitis A is being spread primarily through close contact in the community.

The ADH said besides the vaccination, the best way to prevent hepatitis A is practicing good hand hygiene and thoroughly washing hands after using the bathroom and before preparing or eating food.