JONESBORO – A changing of the guard will soon occur at KASU, Jonesboro’s public radio station as its current station manager retires after 32 years of service and a decade of leadership.

KASU staff members reflected on their time with Station Manager Michael Doyle positivity. Mark Smith, development director, said Doyle served as his mentor for many years. He said he hopes the community joins him in celebrating Doyle and his work throughout the region.

“He has been a good leader for KASU and his natural charm has endeared him to so many in his public appearances for the station throughout the region,” Smith said. 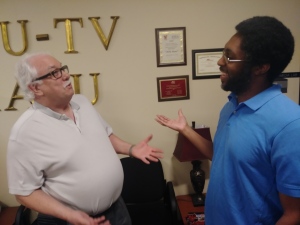 Reflecting back on Doyle’s leadership in community involvement, June Taylor, KASU’s broadcast production specialist, said he understood the importance of connecting with the community. Doyle served the community in taking up the banner of both entertaining and educating the Jonesboro community. Concerts showcasing local acts include “Bluegrass Monday” in Paragould, “Bluesday Tuesday” in Newport and the Johnny Cash Heritage Festival in Dyess.

Helping local acts perform at the Johnny Cash Heritage Festival proved to be a source of pride for the station. Doyle said these acts performed on the concrete slab where the old commissary stood in Dyess. Cash’s childhood home — recently restored by Arkansas State University’s Heritage Sites — served as the backdrop during the concert.

Although local acts did not perform with headliners Rosanne Cash and Kris Kristofferson, Doyle said performing on that stage served as a source of inspiration and pride for these artists. Helping Arkansans find a sense of pride in the state proved to be important to Doyle. When Arkansas native Glen Campbell died, a social media post composed by Doyle noted while others portray Arkansans as ignorant hillbillies, the state’s rich musical heritage should be a source of pride.

Doyle first considered a classical music program to fill the noon hour. But after brainstorming with KASU staff members, “Arkansas Roots” debuted. Program director Marty Scarbrough said Doyle shares his own personal knowledge of Arkansas musicians, resulting in the program greatly benefitting its listeners. He said those who tune into the program learn of pioneers who inspired not only Arkansans but many others.

Not only does the show broadcast the state’s extensive musical history, it also plays current acts who make music for the love of making music. Taylor said the program quickly resonated with KASU’s listeners. Because the program focuses on the roots of Arkansas, people discover upcoming musical events and learn about their community. That, she said, fulfills the purpose of public radio.

Doyle said he hopes he leaves KASU better because of his influence. He said 10 years ago, the station gave him an opportunity to do something other than teach four classes a day. This opportunity gave him a chance to make a difference.

KASU staff members said that change will be felt. Since Doyle established such a clear vision for KASU leadership, Scarbrough said he doesn’t foresee any large changes. Taylor agreed and said his leadership kept staff on the right track, continuing on to the goal. Smith said he plans to hold Doyle to his promise of continuing on working at the station as a volunteer.

Doyle told a story of a man he met while doing doctorate work at the University of Tennessee in Knoxville. After deciding to do something different for lunch one day, Doyle said he stopped in at the Wesleyan Center, a Methodist center for UTK students on campus. He said he found himself drawn to a man wearing a white shirt and tie and engaged him in conversation. After some time, Doyle learned the man served as the director of the center. Before the man’s tenure, very few students attended and the center appeared desolate and run-down.

The man worked to build the center up, performing repairs and engaging students in hopes they would visit. In doing so, the man’s doctorate work — the reason he first came to campus — fell by the wayside. Looking around, the man proclaimed the center became his doctorate. Doyle said he feels similarly about his work at KASU.

“I feel like I’ve left it better than I’ve found it,” he said. “So, this is my doctorate. I’ve never finished it, but I’m glad to have done something worthwhile. And I think this is it and I’m very appreciative of that.”