BROOKLAND, Ark. – Arkansas residents may get away from pharmaceuticals because of the benefits of the cannabidiol oil derived from the hemp plant.

Many Arkansas businesses submitted their applications for a dispensary license in September 2017, but they will not receive clarification until official announcements expected sometime this year. One NEA business, Emerald’s Triangle LLC of Brookland, still awaits its results. Owner Richard Johnston said they planned to get into the medical marijuana industry once the store opened in 2016.

“I went to a convention in Los Angeles in February (2017) that was the big industry show that had to do with vape, CBD and medical marijuana. That’s where I decided to pick up my first company when it comes to CBD: Blue Moon Hemp,” Johnston said.

The store began to sell CBD products and contains CBD tinctures, topicals and powder in its selection. Buyers can purchase it in vape oil, edible and shatter form as well.

“Israel has been on the forefront of CBD, and they’ve been doing research for over a decade,” Holland said. “It can be used for anything from fibromyalgia, general inflammation in all of the major parts of the body, osteoporosis, diabetes and some psychological issues like PTSD, depression, seizures and anxiety. Some even buy it for their animals.”

“The reception of the CBD has been great as more people learn the information, like what it does and doesn’t do, so some of the stigma behind the cannabinoid is kind of being dematerialized. I think that it will just grow bigger and bigger,” Slater said. “Some people need to realize that it’s not a fad dietary trend; we’re all at the very beginning of a new era.”

Emerald’s Triangle owns a closed group on Facebook where users can provide their input on CBD and find answers to their questions.

Paragould resident Hannah Foster said the use of CBD changed her life drastically.

“It helps with my insomnia, vomiting and nausea, eases the pain in my joints and bones, dulls my lisp so I can speak clearly, as in it helps slow down my talking and it helps anxiety dramatically,” Foster said. “You can put the tincture in any food or drink — I love it in my tea — or you can take it directly by mouth.”

CBD affects the endocannabinoid system within the body that regulate the body’s functions, such as sleep, pain, mood and autoimmune responses. The therapeutic effects happen when the cannabinol interacts with the endocannabinoid receptors located throughout the body system.

CBD helps to reduce inflammation, a condition that worsens many pre-existing health issues. The secret to seeing positive results from CBD involves figuring out the right method and amount that will suit the condition.

Dr. Betsy Hendricks of Conway works at the Arkansas Center for the Study of Integrative Medicine. The center’s mission combines the mental, spiritual and physical aspects of health to heal and relieve those of their pain.

“She’s a super sleuth. She’s traditionally trained but uses supplements and knows the labs to run for food sensitivities,” Murray said. “She helps people heal as where traditional medication just runs around in circles.” 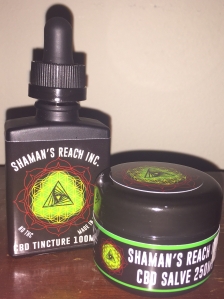 The staff at Emerald’s Triangle LLC recently released Shaman’s Reach, a line of CBD products that they manufacture in Brookland.

Shaman’s Reach combines CBD and medicinal herbs aiming to target inflammation, pain, fatigue and even allergies. The most popular form of this product is a tincture, which is to be dripped under the tongue. There are also capsules, salves, isolates and infused honey as well as smokable products, which makes the product accessible to all. Their informational website regarding medical marijuana can be accessed here.

As the uses for CBD increase, many common issues are expected to decrease. The staff at Emerald’s Triangle said there’s a change coming.

“It’s happened in many other states and now Arkansas has a chance. They’re going to see that the opioid epidemic is going to drop, the addiction problems will drop, the prescriptions will drop. The state will save tons of money on insurance,” Johnston said.